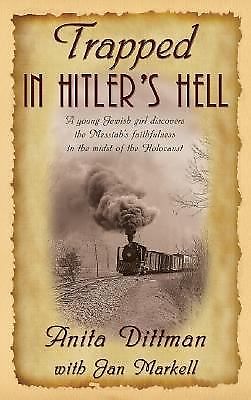 SKU:
$11.95
$11.95
Unavailable
per item
"A young Jewish girl discovers the Messiah's faithfulness in the midst of the Holocaust"

Anita Dittman was just a little girl when the winds of Hitler and Nazism began to blow through Germany.  By the time she was twelve, the war had begun.  Abandoned by her father when he realized the price of being associated with a Jewish wife and family, Anita and her mother were ultimately left to fend for themselves.  Anita's teenage years are spent desperately fighting, for survival yet learning to trust in the One she discovered would not leave her!  True Story!

Anita Dittman, a Jewish believer since the age of seven, speaks to many churches and groups about her experiences during WWII in Germany.  She resides in Minnesota.  Jan Markell co author, has authored nine other books. She is the Director of Olive Tree Ministries, an informative, cutting-edge news ministry that includes her relevant radio talk show.

Sold out
Add to Cart